It’s here, at last: honest-to-goodness bi-directional syncing of snippets between your Mac and the iOS TypeIt4Me Touch app on your iPhone / iPad. What was previously a perk reserved exclusively for the Mac App Store-specific version of TypeIt4Me is now available in TypeIt4Me 6, outside of Apple’s hitherto closely guarded walled garden. 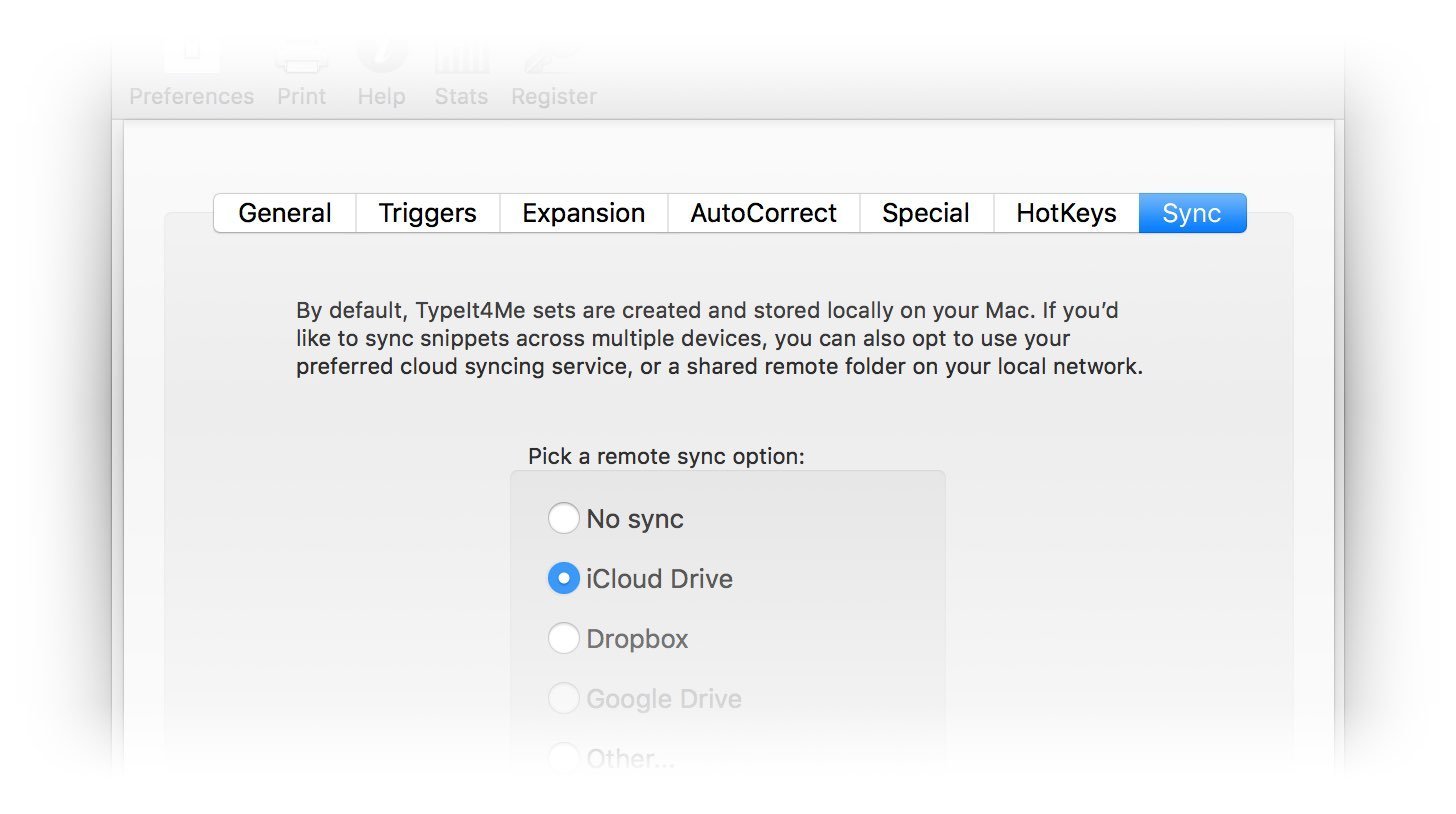 If you are already using the iCloud Drive sync option in TypeIt4Me 5.5.x (i.e. the non-Mac App Store version), the first time you run version 6 it will automatically move your existing snippet sets from the old, visible TypeIt4Me folder in your iCloud Drive folder to an invisible folder that’s effectively a magic black box shared with iOS. Don’t be alarmed if it looks like your files have disappeared in the Finder; that just means the transition was a success. Your files are still there and you can always get to them by selecting them in TypeIt4Me and right-clicking to “Reveal in Finder.”

What’s all this iCloud transition guff about?

As you may have observed us explain awkwardly at length elsewhere, iCloud and iCloud Drive are not and have not always been the same thing, even though Apple has often [confusingly] referred to them interchangeably.

For a while, iCloud was a purely “behind-the-scenes” sync service available exclusively to apps sold on the Mac App Store and it didn’t expose a visible folder to the user in Finder. That’s the “version” of iCloud that both the iOS TypeIt4Me Touch and Mac App Store TypeIt4Me (5.4.11) use for syncing. Apple chose to hide the sync folder by default, so it only becomes visible in Finder when you go directly to a file contained in it.

Next, Apple introduced iCloud *Drive* which was initially just a cloud-linked folder on the Mac for backed up storage and for manually sharing files between Macs. It’s available for use by any app. TypeIt4Me 5.5.x, the direct sale version we made available outside the Mac App Store uses this, storing snippet sets in a visible folder named TypeIt4Me.

In its infinite wisdom, Apple decided that iCloud Drive and the original iCloud sync service would operate in parallel, using separate server space for each, so files visible in one repository are not simultaneously visible or accessible in the other, even when both are tied to the same account.

Relatively recently, iCloud was opened up and “merged” (in a manner of speaking) with iCloud *Drive.* Now Apple offers it as both a means of behind-the-scenes syncing and a folder-based drag-and-drop cloud storage system visible in the Finder. The syncing aspect is no longer reserved solely for apps sold on the Mac App Store. TypeIt4Me 6 has been updated to take advantage of this, so it’s now able to sync snippets with the iOS app.