Good day to you fine folks making your way out there in the Macosphere. It’s been an eventful week, wouldn’t you say? Here at ES headquarters we’ve just about recovered from Tuesday’s spectacular Apple media event, though we almost had to be revived with smelling salts after the big reveal of the new Retina display iPad mini. What a razor sharp beauty.

Of course, the other big news was the launch of Mavericks. In the wake of Apple’s newest operating system being released for public consumption, we’ve been contacted by a number of customers asking how to make TypeIt4Me play nicely with OS X 10.9. As some of you have already discovered, Apple has re-jigged the Accessibility system settings in Mavericks and TypeIt4Me is disabled immediately after upgrading. Don’t worry, though, for help is at hand. All you need to do to get it working normally again is follow these simple steps: 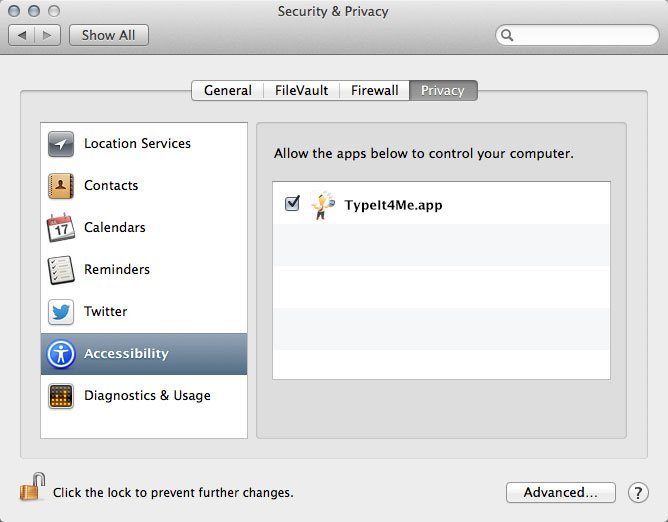 That’s all there is to it. TypeIt4Me should now work normally again and you ought not to encounter any further issues. Please accept our apologies for the inconvenience if this has troubled you. We’ll shortly be releasing an updated Mavericks-savvy version of TypeIt4Me, but we’re posting these instructions so as not to leave anyone high and dry in the meantime. If you do run into any other unexpected hiccups, we’ll be happy to troubleshoot them with you.

Hopefully this allays any fears you may have had about upgrading to OS X 10.9 and losing the use of your TypeIt4Me abbreviations. If that’s all that’s been holding you back, we’d encourage you to take the plunge and install Mavericks. Our experience so far is that it offers great performance improvements overall; it’s even breathed new life into some of the wheezy older machines we keep lying around for sentimental reasons testing purposes. Surf’s up…enjoy!

[Edit: a few people have found that even after following these steps TypeIt4Me remains disabled. You may need to log out and then log back in. If it *still* won’t cooperate, try opening your TypeIt4Me preferences, click on the Expansion tab and ensure the checkbox for ‘Disable keyboard expansion’ is *not* selected. There appears to be a bug that switches it on for some people – we’ll look to fix that in the next release.]