Special offer: 75% off TypeIt4Me in the Mac App Store.

Hear ye, hear ye! Calling all Mac fans and text expansion enthusiasts. For a limited time only, you can take advantage of a Mac App Store exclusive offer and buy TypeIt4Me for the downright silly price of just $4.99 (USD). There’s no need to rub your eyes, you read that right. $4.99 in US dollars. That’s £2.99 for those of you in the UK and 3.99€ for eurozone dwellers. We’ve gone soft in the head with Lion mania and to celebrate the imminent launch of Apple’s latest big cat operating system – Mac OS X 10.7 – we’ve temporarily slashed the price of TypeIt4Me in the Mac App Store by 75%. This special offer will end on August 1st. If you act fast, you can grab yourselves a stonking great bargain.

Even those of you who have already purchased a TypeIt4Me licence from us directly in the past might wish to consider grabbing it from the Mac App Store* now while it’s as cheap as chips. Doing so would entitle you to free updates for all future TypeIt4Me 5.x versions, meaning you could avoid stumping up the standard $8.99 fee for upgrades that will otherwise come into effect 18 months from your initial purchase. Food for thought, no? Why not spread the word and let your friends get a slice of the action, too. …Mmmmmmm, tasty, tasty TypeIt4Me.

* Note that before buying it from the Mac App Store, you will need to quit your existing copy of TypeIt4Me and move it from your Applications folder to the Trash. Don’t worry, your existing clippings and settings will be preserved. After purchasing TypeIt4Me from the Mac App Store, simply double-click your clippings file (usually stored in Home or Documents folder and ending in .typeit4me).

Howdy folks, we’re just poking our heads over the parapet to bring you news that TypeIt4Me 5.2 is out today. This update is free if you paid for a full or upgraded licence after 1 January 2010 – so if you’ve already given us some of your hard earned dosh at some point in the last 18 months, you’re good to go. Otherwise you’ll need to stump up a modest US$8.99 if you want to benefit from the latest features. Can’t say fairer than that, can we?

New or changed features in TypeIt4Me 5.2:

SpeakMyTunes hits No. 1 in Italy 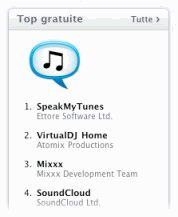 We are happy to report that since we released version 2.0 of SpeakMyTunes yesterday, it has climbed all the way to the top of the Mac App Store’s free Music downloads chart in Italy. Not only is it occupying the number one spot in the Music category, but at the time of writing it’s also the seventh most popular free app overall. It’s great to see people enjoying SpeakMyTunes and giving us so much positive feedback. We will of course continue development and add further features in future. Grazie mille.